We recently purchased Hue bulbs for our Kitchen they’re great, but since we already have an RFXCom 433 unit (as per my blog on automating hifi), we wanted to automate the lights and invested in a Lightwave PIR motion sensor. 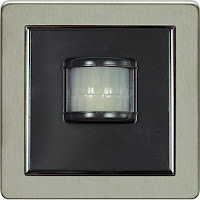 I downloaded Domoticz [http://domoticz.com/] on an SD Card for my Raspberry PI and also installed node-red [http://nodered.org/] a tool for filtering and processing MQTT messages.
Domoticz is used to store the state of the motion sensor and is configured to emit an MQTT message whenever the state changes.
We also wanted the lights to have a different colour depending on the time of day we enter the kitchen, for example during the evening we might want a relaxing light, meal times a white light above the dining table and during the day some multi coloured lights, but not change them if they've already on.
For each of the time slots of the day, a template has been created containing the settings of each of the main and dining lights and will send these on to the relevant light bulbs.
When motion is triggered, the node-red flow decides which template to use and as an additional requirement, switches the lights off after a configurable delay once no motion has been detected.

The PIR will send an 'off' signal when it detects no motion, a switch on the back can be used to configure this and I've set it to 2 seconds. If Domoticz receives an 'off' signal, then an MQTT message is sent and all messages received on ‘domoticz/out’ are received by this flow. The messages are filtered by the IDX value of the switch in Domoticz and a filter detecting motion indicated by the payload.nvalue. When the nvalue is 1, the message is directed to a trigger node which will delay it for 5 minutes. After 5 minutes, the trigger node will emit the same message to a 'turn light off' template the result of which is sent to both the dining table and main kitchen light.

The PIR will send an 'on' signal when it detects motion. If Domoticz receives an 'on' signal, then an MQTT message is sent and received by this flow filtered by the IDX value of the kitchen sensor in Domoticz and a filter detecting motion indicated by the payload.nvalue. When the nvalue is 0; this does 2 things.

1: The message is directed to the 'Reset Timer' template node which generates a new message with a 'reset' attribute set to true, this is passed into the trigger node cancelling any timeout in process. This is useful if someone leaves the kitchen, the timer will start a countdown to switching the lights off after 5 minutes, but then cancel that countdown if someone walks back in before the lights have switched off.

2: The message is also directed to the 'Scene Chooser' which runs a function evaluating the current time and emitting a message on each of the applicable channels to template nodes which will generate some JSON to control the relavant dummy switches in Domoticz switching them off. The function has 5 outputs representing each scene we want:

I've made the flow available to download from here:
https://dl.dropboxusercontent.com/u/174818/TimedKitchenLights.json